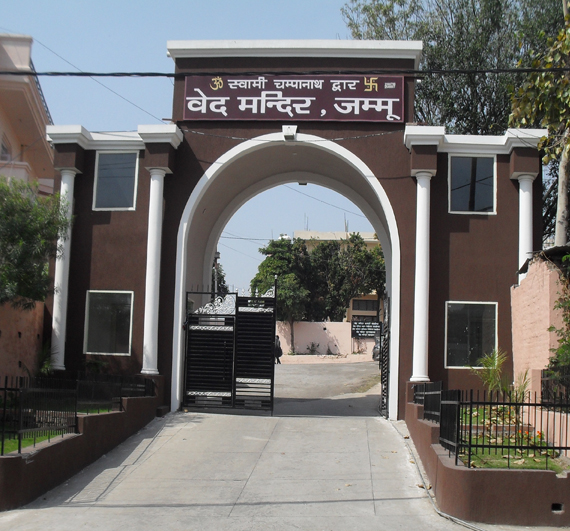 The idea of having a Ved Mandir was concieved by his Holiness Swami Champa Nath Ji Maharaj,a saint. Maharaja Pratap Singh laid the foundation stone of Ved Mandir on 20th December,1916.Maharaja Pratap Singh had given 10 and a half Acres land as grant to serve good causes. Aims and Objects The aims and objects of founding Ved Mandir are to: 1.Disseminate Vedic knowledge, teachings , and culture. 2.Organize cow protection Centres. 3.Undertake other social welfare activities such as running Orphanages, homes for Aged and Infirm, Charitable Medical Missions and caring disabled, handicapped and destitute. Ved Mandir is an organization registered under the J&K Socities Registration Act. SVT 1998(1941 A.D) (Act No. VI of SVT 1998) under no.62 of 1964. It has a general body of 45 memebrs who elect 5 office bearers for a teram of 2 years. Day-to-day affairs are managed by a Managing Committee of 12 members (including 5 office bearers). Public donations are the main source of income. Grant-in-aid received from the J&K State Government is very meager. During the year 2013-2014,Rs. 1,35,000 only was given whereas as per scale, Rs. 3,98 lac was recommended to the State Government for sanction by the directorate of Social Welfare. Grant-in-aid for the current financial year is awaited. Institution has never received any Grant-in-aid from the Central Government. Organization is running its own Primary School W.e.f 7 April, 2008 , for other children which is housed in 12 class rooms. It has a strength of 62 children. School has its own Library. Children above primary classes study in the following schools: 1. Dewan Badri Nath School 2. KC International 3. Bhartiya Vidya Mandir There are maruti vans being used in the service. There are Water-Coolers, Aqua Guards, Refrigerators, TV Sets, Washing Machines, DVD Players and Table Tennis. There are vast playgrounds for outdoor games available to the children. The garden having fruit trees is well maintained and they relish the fruit and vegetables grown in it.

It should be mentioned here that police and CHILD-LINE(an NGO) also admit stray/abondoned children for short stays in our Orphanages.For example, a girl-child, Seema was admitted in Balika-Niketan on 17 July 2007 and has not been restored to her parents and is still with us.

Designed and Developed By Rahul Dogra at Conflutech